Windice has been playing a vital role for the income of people around globe. It not only lets one earn but spreads happiness too. Users in windice belong to different continents and when unknown people meet, for their interaction a source is needed. Windice arranged it through chat rooms. People speak in different languages and their are separate chat rooms to Comfort everyone's talking medium in a particular language. Some of the people can manage English talk with others which caused a more rush in English chat room than any else. Chat rooms are blessed with so many activities and are run by mods for stability.

What is worth in chat room? Why is this discussed? Let's have some beautiful views on chat to make you understand what chat room plays for the users.

Chat room is fun when one meets with new friends and interact for the first time. It gets more funny when one becomes older because he might be around people very much kind and helpful. He might meet people too suggestive and shoulder to shoulder accompanier! I'm one of those users who have known none, but with passage of time, everyone was well-familiar with me. Chat room is not only a source to communicate when have nothing to play, but really a source to help users get something to play, whether that be wincoins or other crypto coins. These all, in short, are blessings to be wished to get! There are some highlighted blessings of chat room downward.

Windice Bot Rain is random and happens for those actively chatting with people, not doing time pass but making chats constructively. It helps people to gain some coins and expo to boost levels up. Rain of coins and expo happens on random times, sometimes it takes 3 minutes sometimes 5 and sometimes even more. To justify my points some of the screenshots are attached with as followed downward. 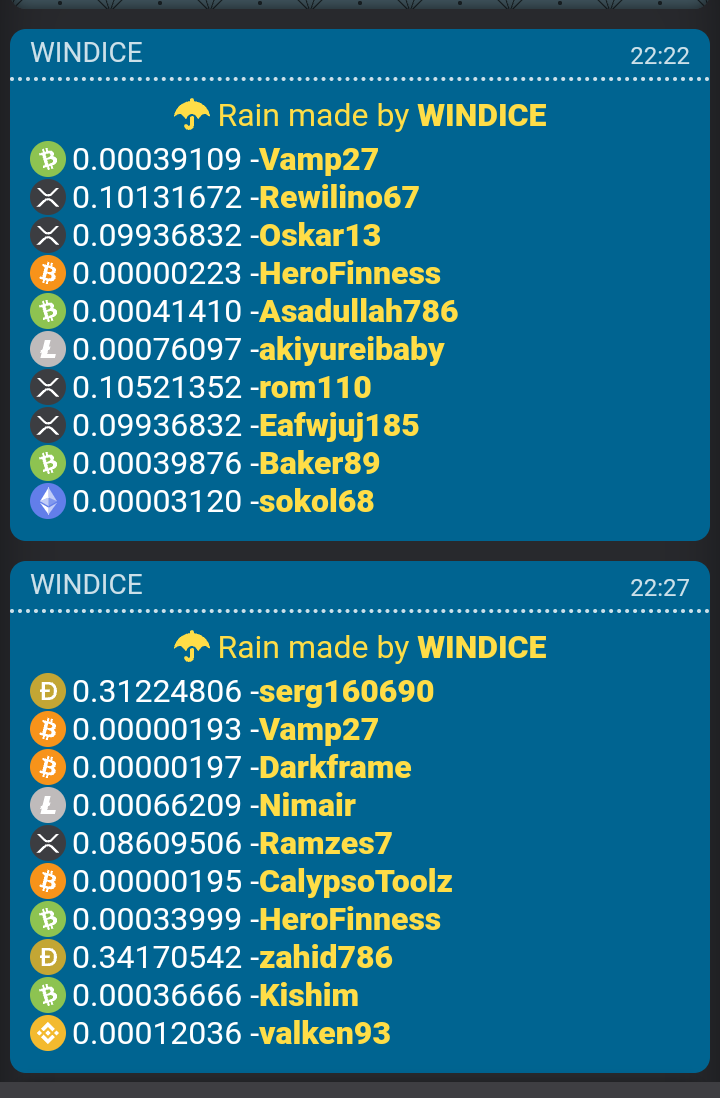 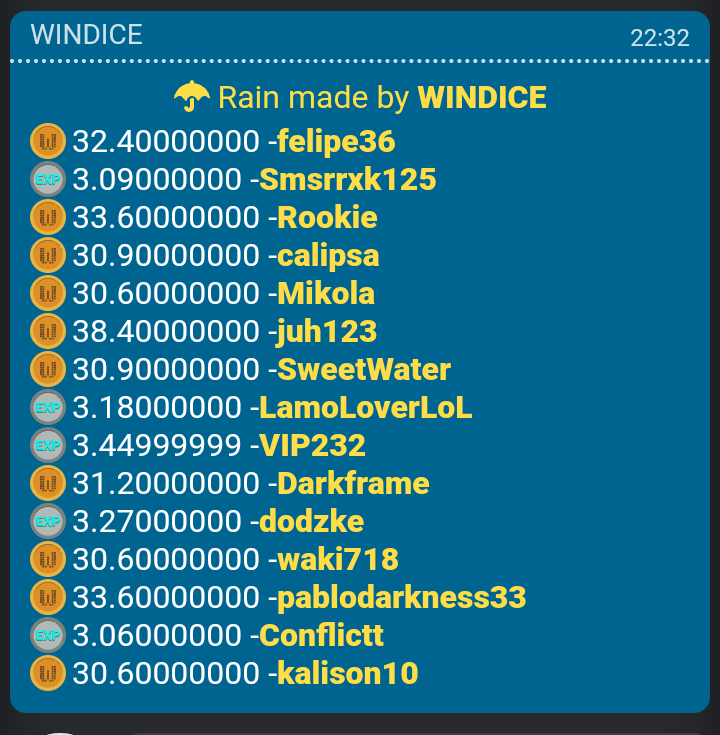 Mods have fixed routines to go for raining in the chat room. Most of the people really get huge help while this is happening. Sometimes the rain of cryptos happen and sometimes wincoins, however, either of them is supportive too. Besides mods, there are some kindhearted users whose win always be heavy rains with thundering in the chat room. It wit users well active in chat and help them get a chance to win big some of money. There is a difference in mods rain and users one. Mods can rain whatsoever they have, but users to reach out the limit of raining. 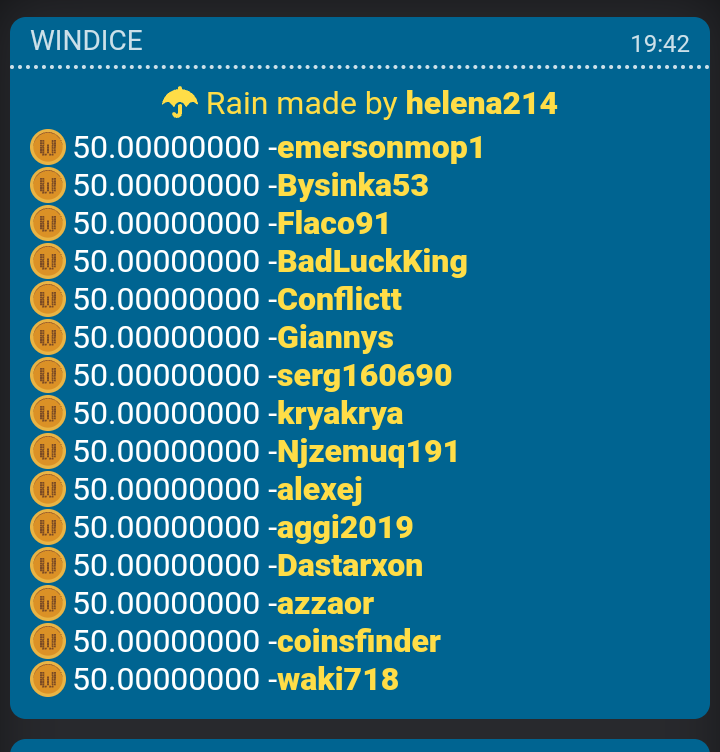 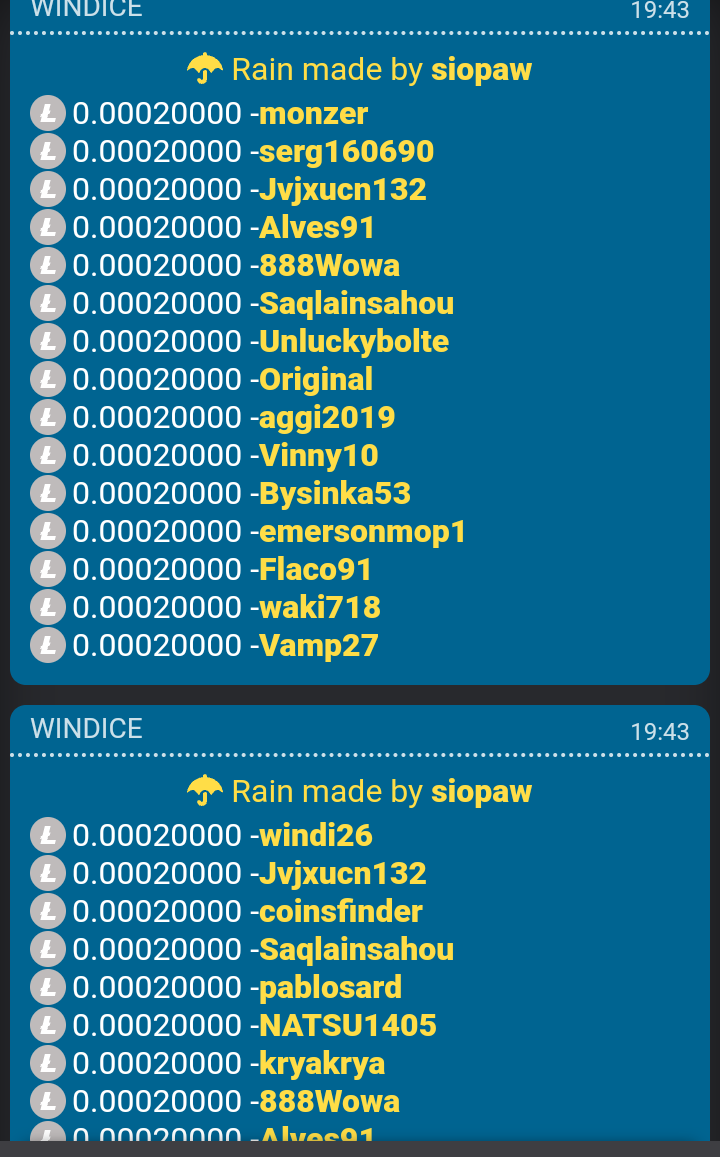 Rain SS of a user 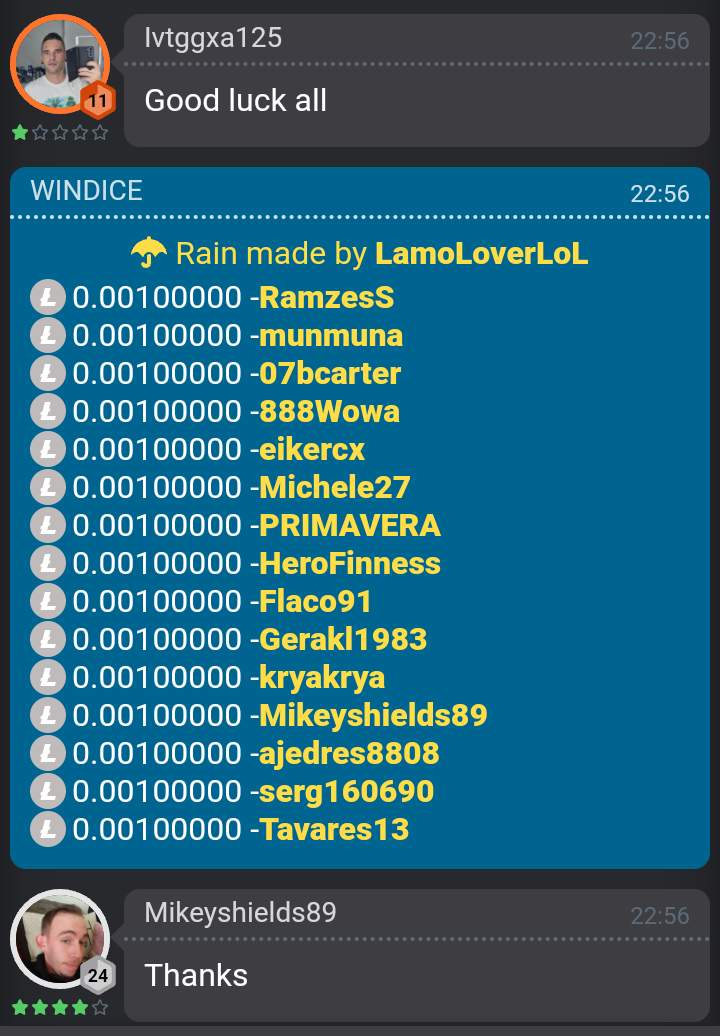 Uses too love to make trivia for the people in chat. Because they feel how they were and what the chat users are waiting for? Their trivias are really beautiful ones like the mods because some of them copy mods method of Trivias. When I'm doing a trivia, I mostly copy Anonnep's way. And when a user called, Nimair, doing a trivia he copies almost all. In short, these trivias build a funny environment and be source of helpfulness in chat room. 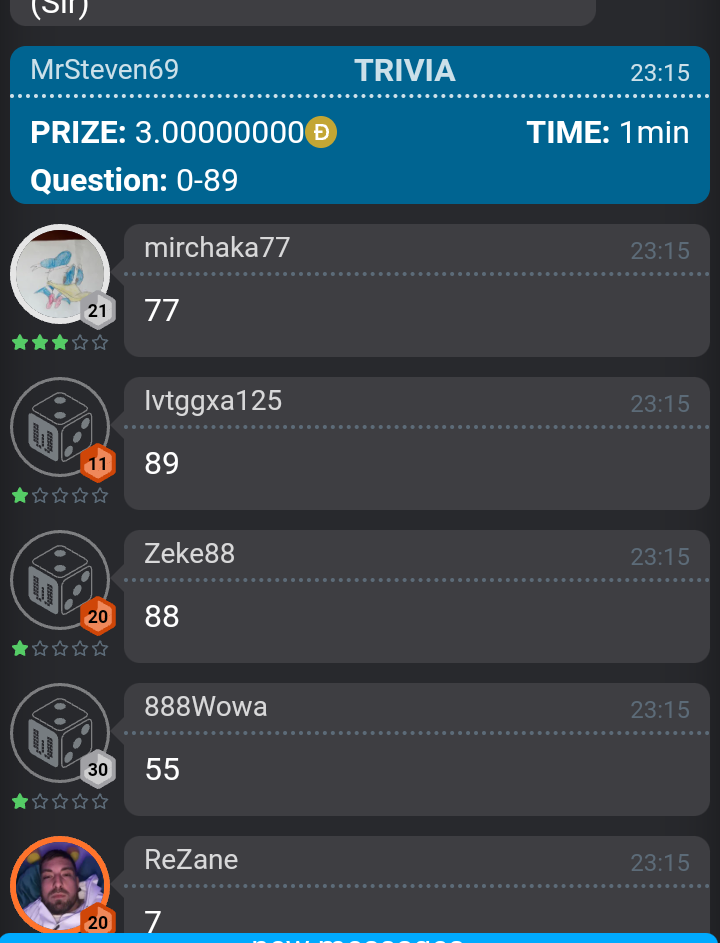 To entertain chatters, mods are assigned to go for making trivias. I really enjoy when Anonnep comes for trivia on his fixed time. This activity of him is full of fun and support to play and step in daily doges contest. Same as him, ultraa mod always does trivias for the related propose. Not only they both, but other mods too. Each of them has their own style of trivias. To remember, some mods apply the hunt challenge in big trivias to help out uses with a great number of crypto Satoshi and wincoins.

That won't be useless if one gets a song played from his favorite playlist on radio. The chat provides full information about listening favorite song on radio and getting 100 wincoins as bonus out of it! It sometimes help users to start a game to compete with other users in daily doge contest. It is too unique and all one can gain happiness and fun when actively chatting in the chat room. 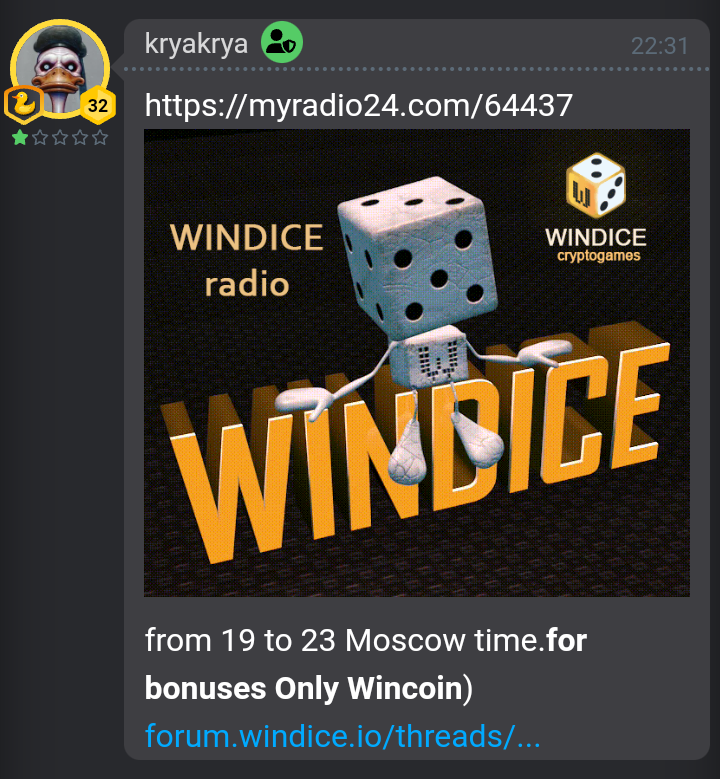 These all help in play when out of cryptos and wincoins, what else is loved in chat is friendliness, kindness, supportive moods, motivators in shape of users. I myself have felt demotivated and was encouraged by some of the users, most credits to @LamoLoverLoL. Chatrooms, I mostly use English and Portuguese, are a family in one side, on the other side, they are more than a family.


At last, I cannot express more that the readers may get bored. All that one can expect, chatrooms are always the best in windice. Live long chatrooms, live long users and live long Windice.
Last edited: Nov 5, 2022

any ways in long terms patience is the key i think casino chat is the most important options imagine a casino with out chat . it might be a cool place dry page without any communications and this may bore u so much . but i think all users need to use chatroom by true ways

LamoLoverLoL said:
any ways in long terms patience is the key i think casino chat is the most important options imagine a casino with out chat . it might be a cool place dry page without any communications and this may bore u so much . but i think all users need to use chatroom by true ways

Copyright. If the idea is protected under copyright that Unluckybolte which tried to clone the idea will get punished for the infringement of copyright act under Section 14 of Copyright Act and one who violates the copyright of anyone will have to go through Anonnep trivia as the legal proceedings.
You must log in or register to reply here.
Share:
Facebook Twitter Reddit Pinterest Tumblr WhatsApp Email Share Link
Top