What Is EIP-1559 and Why Are Markets So Excited About It?

The Ethereum network has, in its short six-year history, come to dominate cryptocurrencies. While Bitcoin has hogged the headlines thanks to its spectacular rises and falls, Ethereum has cemented itself as the place where people go to build things on blockchain. But with that dominance has come a number of challenges. The first and foremost is transaction times. While faster than Bitcoin’s paltry 3-5 transactions per second, the popularity of Ethereum has meant its 10-15 transactions per second is struggling to cope. To compensate, the amount of ‘gas’ paid per transaction - a fee submitted to miners to include a transaction in a block - has skyrocketed. In January of this year, transaction fees were at one time, as high as $500 to send money through the network. For the miners, Ethereum became a literal gold mine.

In May, mining revenue on Ethereum hit $2.35 billion and has stayed doggedly high. While that was good for miners, it forced a number of smaller projects who needed low transaction fees to seek alternative blockchains to help reduce operating costs.
Ethereum’s fee problem has led to a flurry of rival projects jostling to offer developers and their users low fees and fast transaction times, including projects like Solana and Near. In response, the core developers of Ethereum have put forward a solution, Ethereum Improvement Proposal 1559.
EIP-1559 as it’s commonly referred to will help reduce the cost of moving data around Ethereum and increase the scarcity of Ether, effectively making ETH more scarce and, theoretically more valuable. But not everyone is in favor of the changes.


What Is An Ethereum Improvement Proposal?​

Ethereum’s evolution is largely determined by submissions put forward by the community that maintains the network.
These are collectively called ‘Ethereum Improvement Proposals’ and typically involve a developer or group of developers submitting a change to the network that is then reviewed and debated by the core developers who manage Ethereum’s code repository on Github, a platform for storing code.
If the improvement is accepted, it’s typically bundled with other improvements in broader network upgrades called hard forks. The most recent hard fork was called the Berlin hard fork and included a number of security improvements and new types of transactions.
EIP-1559, which was first put forward by Vitalik Buterin and a collection of core developers in April 2019, has been added to the next hard fork of Ethereum code-named London, due to take place in July 2021.

The 1559 proposal is designed to make transactions on Ethereum more efficient. At present, Ethereum has an auction system that determines which transactions are bundled inside what blocks. The more a user is willing to pay, the more likely a miner will include a transaction. The busier the network, the higher the fee, meaning users have to factor in network congestion when trying to estimate the total cost of moving data around the network. By switching to EIP-1559, that system will be replaced by a fee structure that is priced automatically by the network. On top of that, a tip system would be introduced to allow people who want their transactions verified faster, to pay a miner to do so. There’s a belief that this move would effectively cut transaction costs by 90% and reduce the uncertainty over how much it would cost to transact on Ethereum. But there’s also another impact the proposal will have on the network.

While proposal EIP-1559 is designed to help reduce transaction costs, its design has also been dubbed “Ethereum’s scarcity engine”. That’s because the base transaction fee that a user pays to transact, instead of going to a miner, is effectively sent to the network and “burnt” reducing the amount of supply.
“Ethereum’s net annual issuance will drop substantially following the Phase 1.5 ETH 1 to ETH 2 merger,” said Messari research analyst Wilson Withum.

The improvement proposal has been met by resistance from some mining pools. Flexpool launched a marketing campaign against the EIP in early 2021, which was joined by several other pools. Sparkpool, the largest mining pool with about 24% of the hashrate, said in a Tweet that it opposes the proposal, whereas F2Pool, which holds about 11% of the network’s hashrate is in favor of the move. 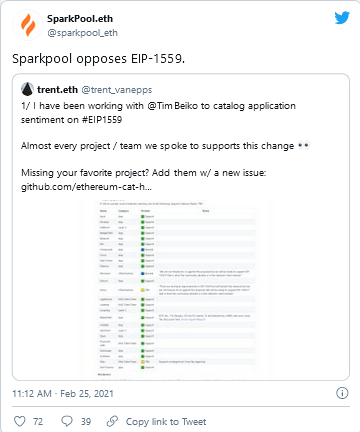 In January, Bitfly, the operator behind Ethereum's second-largest mining pool Ethermine (which possesses about 20% of the hashrate), said in a Twitter post that it is "against adopting EIP-1559 in its current state," arguing that "Ethereum's future may be at risk."
This represents a bit of a conundrum for Ethereum: more than 50% of Ethereum’s current total hashrate is opposed to the movement. It’s unclear how that might impact the roll out of the proposal, but some miners have already sought alternative revenue streams, most notably, miner extracted value.
This controversial technique involves mining pools using bots to scour transactions in the network’s mempool - a repository of upcoming transactions to be verified - looking for arbitrage trades it can copy and make a profit.
Once it has copied the trade, it will increase the gas price for verifying the transaction, and even push the miners' trade through the network first ahead of the trade currently waiting.
“After scraping the Ethereum blockchain starting from the first block of 2020 (9193266), we’ve found a total of at least $314M worth (~540k ETH) of Extracted MEV since Jan 1st 2020,” a Medium article from research group Flashbots explained earlier this year.
Some mining pools disagree with the approach, and have even built tools stopping miners from using this technique. One of the biggest is SparkPool’s Taichi Network which prevents bots from spying on what transactions are currently in the queue. With the migration to a proof-of-stake network still some way away, expect a bumpy summer for Ethereum and its price, once EIP-1559 goes live.