What do you think ??? Blockchain disrupts the Automotive Industry????

Jump 5–10 years in the future and imagine the following scenario: You’re residing in a big city like New York and you want to get from point A to B. You open your app and book a ride with an autonomous vehicle, like the one Toyota presented at last years CES. While driving through the city, the vehicle partially recharges its electrical battery inductively every time it has to stop for a few seconds at a traffic light. For getting on and off board no face-to-face interactions is needed, but happens fully automated. 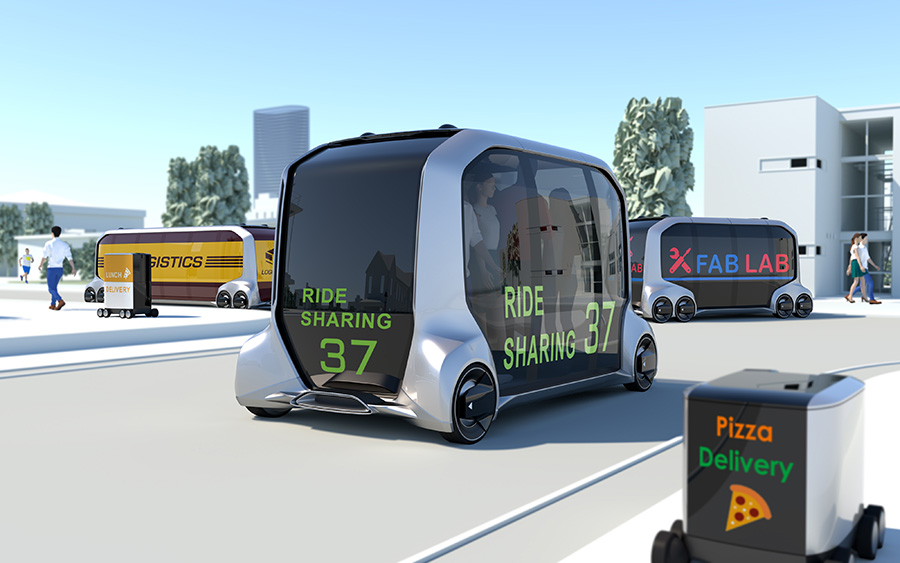 Toyota’s autonomous vehicle “e-Palette” (Source: https://global.toyota)
You may now ask, which role blockchain plays in this scenario. Actually it’s everywhere! From interconnected vehicle production processes to streamlined recharging and a simplified handling of bookings. Blockchain reduces process complexity, removes intermediaries and lowers total cost of ownership. The following use case examples are selected based on the above described scenario and should demonstrate blockchain’s capabilities to disrupt the automotive industry as well as mobility in general.

Today’s supply chains do not provide full visibility. Asking the simple question “Where is car XY?” could not easily be answered. Due to the lack of interconnected databases, relevant information reside at siloed places without any chance to bring transparency in production and logistics processes. From OEMs, to logistic partners and Tier1-n suppliers, a large number of stakeholders are taking part in automotive supply and production chains. Everyone is creating huge amount of data as well as is relying on data which is produced by other stakeholders. Way too often this data is shared analogously, producing tons of printed or even hand-written paper. Blockchain has the potential to solve these problems. By its definition blockchain is a distributed database. Therefore, it is mandatory that every participant is connected to this database, which would break up data silos caused by legacy systems. Every step in a supply chain would be documented and distributed across the blockchain. Asking the question from above again — Where is car XY? — could now easily be answered by accessing information stored on blockchain.

In blockchain systems it is crucial to identify data entities accurately. Take for example the blockchain-based storing of a car’s mileage. If you can not be 100% sure if some reported data is linked to car A or car B, the entire systems is worthless. Therefore, as a pre-requisite for nearly every blockchain use case in the Automotive industry, a car must be clearly identifiable. In this context, the Mobility Open Blockchain Initiative (MOBI) defined a standard called Vehicle Identity (VID). The VID can be compared to the already existing Vehicle Identification Number (VIN), which is imprinted on every vehicle. Whereas the VIN is focusing on the physical identification of a car, the VID is designed to represent a vehicle digitally. Once a new car gets manufactured its unique VID is put on blockchain. From now on, every transaction the car performs, from selling sensor data, to usage based insurance or automated traffic routing, the VID is used to identify the vehicle in the digital space exactly. The following picture illustrates some more use cases, where the identification of a vehicle is mandatory. One of blockchain’s killer attributes is to reduce the dependency of intermediaries. Take for example an employee who is charging a company’s car at an EV charging station and paying with its private debit card. Several stakeholders are involved:

The complexity of products is steadily increasing. Nowadays, modern cars are built out of several thousand individual parts. During the production process of a new car, components from multiple suppliers are integrated. Those suppliers are again sourcing components from their suppliers. And so on. In the end it is quite complex to assess if all production steps were taken correctly. Blockchain could solve this issue by introducing a comprehensive documentation of every single production step on a distributed ledger.

Industry 4.0 Audit-Trail by IOTA and Fujitsu


It is already happening​

IBM: “How automotive pioneers are taking the plunge into blockchain”
So, the awareness of blockchain technology is already quite high, but which concrete actions are taken by industry leaders?

Porsche can be named as one of the first automotive companies, who started experimenting with blockchain technology. In the beginning of 2018 they announced a partnership with the digital startup XAIN. In their use case they demonstrated the accessing of a car based on distributed ledger technology.

Ford acts in the field of transparent and ethical sourcing of material. Due to the rise of electrical cars, it is expected that the demand for cobalt (an essential component in lithium-ion batteries) multiples eightfold. In order to prevent stakeholders to process child-mined cobalt a blockchain tracking system will be installed. Every stakeholder in the supply chain adds tracking and processing information about the mineral to the blockchain, ensuring a transparent supply chain from mine to market.

Volkswagen started a similar project in partnership with tech company Minespider in spring 2019. There are also some rumors about a collaboration between Volkswagen and IOTA to develop a “Digital Car Pass” based on IOTA’s tangle technology. Furthermore, they plan to prevent odometer fraud by storing mileage data on blockchain.
Car identity, as described above, will be an important topic in the blockchain ecosystem. The company Car e-Wallet aims to provide a solution to securely equip a car with an blockchain identity and wallet functionalities. Car e-Wallet was initially founded within the automotive supplier ZF Friedrichshafen AG and acts now as an independent subsidiary.