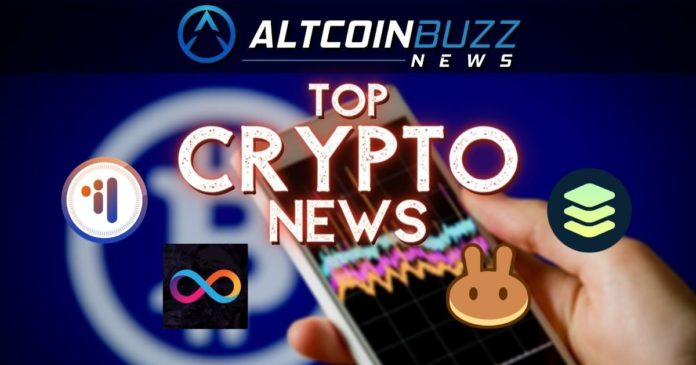 Twitter CEO Jack Dorsey commented on Twitter, stating it’s “only a matter of time” before Bitcoin’s Lightning Network is added on Twitter or BlueSky. Dorsey has reportedly been working on BlueSky since 2019.

Notably, Lightning Network is a second-layer scaling solution designed to speed up Bitcoin transactions. Also, the network reduces costs by routing transactions through channels without needing to use the Bitcoin blockchain to verify each transaction. It allows for the creation of user-generated channels to receive and send funds.
However, Dorsey didn’t specify the platform that will be integrating Lightning Network.

On Thursday, a non-fungible token (NFT) of a digital artwork (CryptoPunk #7523) sold for $11.8 million at Sotheby’s.
CryptoPunk #7523 is reportedly one of the most sought-after Alien varieties with blue-green skin and wearing a medical mask. 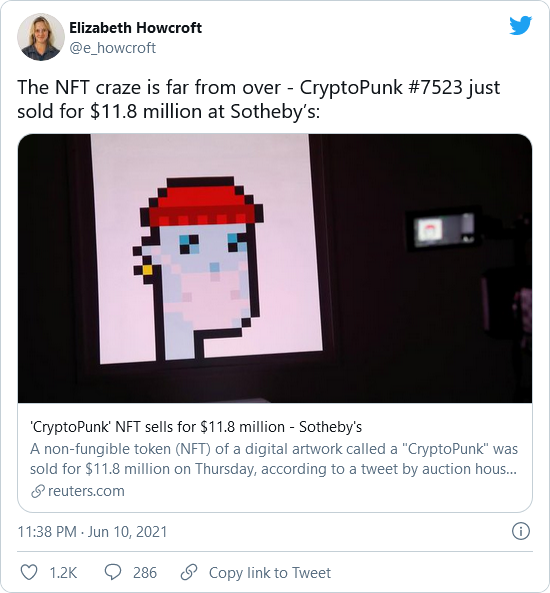 Notably, it’s in the form of an NFT, which means it’s authenticated by blockchain. Thus, certifying the NFT’s originality and ownership. CryptoPunk #7523 will be sent to the buyer’s cryptocurrency wallet. The sale was also part of Sotheby’s online auction named “Natively Digital: A Curated NFT Sale,” which brought a return of $17.1 million across works by 27 digital artists.
Besides, the NFT was bought by Israeli entrepreneur Shalom Meckenzie, who is the largest shareholder of digital sports company DraftKings (DKNG.O).
Michael Bouhanna, Contemporary Art Specialist at Sotheby’s, mentioned that the sale of CryptoPunk #7523 and other non-fungible tokens shows a continuing strong demand for NFTs.

Fuse Network announced that three new liquidity reward programs will be introduced on the PancakeSwap DEX on Binance Smart Chain (BSC).
Starting from June 10, 2021, LPs (liquidity providers) on the FUSE/BNB, FUSE/ETH, and FUSE/USDC pairs will earning 50,000 $FUSE per pair over the next eight weeks.

Following three-and-a-half years of development, the Motoko team at the DFINITY Foundation announced the open-sourcing of the Motoko compiler. Overall, this also includes the interpreter, test suite, and documentation. The full sources of Motoko, along with its previously open-sourced base library, will be available under the Apache 2.0 License.
Motoko is a programming language that was created to support the programming model of the Internet Computer. Thus, ”making it easier to efficiently build applications and take advantage of some of the more unique features of the platform.” The system is also “strongly typed, actor-based, and has built-in support for orthogonal persistence and asynchronous message passing.”
Additionally, the productivity and safety features of Motoko include pattern matching, generics, type inference, automatic memory management, and both arbitrary and fixed-precision arithmetic.

In our last bit of crypto news stories for the day, we find Xend Finance ($XEND) announcing a new feature that allows users to earn up to 70% APY in $XEND on savings.
“We are always looking for ways to help our users earn more on their savings and build long-term savings habits by incentivizing savers with $XEND,” the official announcement said.
Notably, the new feature allows Xend Finance users to save and earn multiple levels of interest and benefits. Aside from the stable currency interest users get on their savings, they can also earn $XEND tokens.
This also means that when users save on the platform, they earn a stable interest rate of around 15% APY. Additionally, they can get up to 70% APY in $XEND tokens based on the savings amount and lock-up period. Thus, the longer the funds are saved on the platform, the more $XEND tokens are received. This will encourage users to save for the long-term and “not give in to the temptation to withdraw.”
You must log in or register to reply here.
Share:
Facebook Twitter Reddit Pinterest Tumblr WhatsApp Email Share Link
Top