Rolling in the Dip

Not the song. Not a misspelled title. Yesterday feels like a domino game. Someone lit the fire, and started the game down. And I am talking about the state of the Market. And personally think the game blows every emotions of certain individuals. How to remain calm in these situation? Be a ball, keep it cool, roll and roll until everything's bounce back up threefold, tenfold or more.

My speculation base from the news about why the Market went to the deep red blood sea.

To tell you honestly, if I haven't learned about crypto, I wouldn't know Elon Musk. Haha! Yes, now I know he's one of the richest people in the world. I couldn't care less though, but because of the news that he's accepting bitcoin as a payment on his electronic cars, I got to know him! Well its not my thing to research the most richest people in the world. I just go on live by everyday. Okay back to the topic, recently he posted a lot of tweets, about the energy consumption of bitcoins and other currency. Where he points out about coils and fossils and such I won't go technical because it is not my field. But, I think it made sense, my say is that, if we can create technologies like digital assets and such, why not make it more eco-friendly. Because in the end, environment matters. 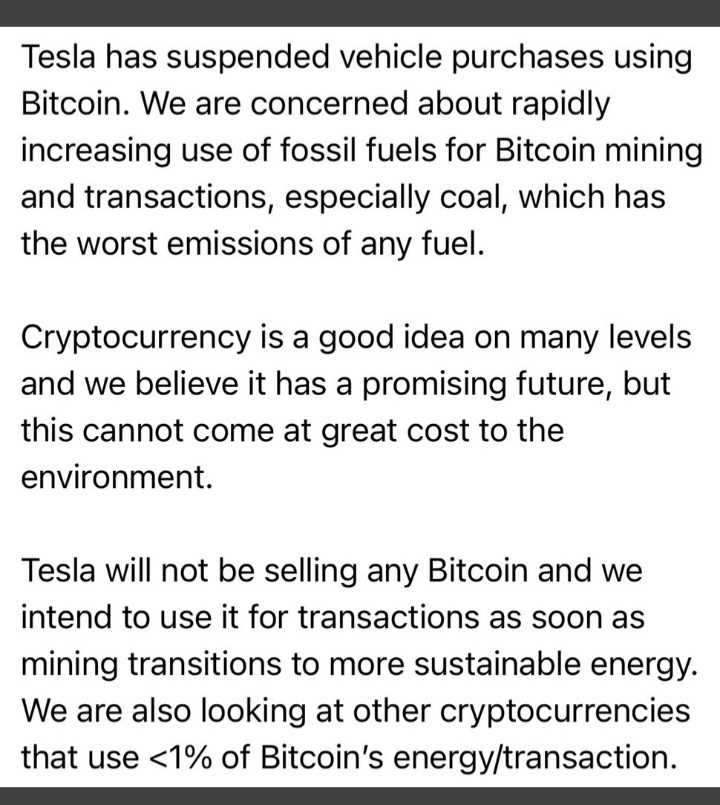 Based on his tweet, it triggers the 'people' on the Market and go down, and also, China news about banning and not accepting Bitcoin as payments has pushed it Bitcoin to go down. Are they really? Or they are trying to own the whole digital crypto Market? So hodl.

My speculation about the drop of the Market based from graphical representation. BCH as an example.

Recently I stumble on tab trader, which is a trading platform where you are allowed to monitor the graph and draws line, ray segment to speculate the Market next movement. I too expected that the market will drop, and did not expect to go beyond the previous price where I started here in read. About 490$ and it was a shock. Haha. But yeah, everything about crypto Market is shocking and a game. Last 2 days ago I draw lines in the graph. I used the last support level of from previous drop every new ath. And I was surprised to see that, every 8days from the last ATH, the market drops, only that yesterday it drops massively like I didn't expect. Each line below are my possible support base from previous support level. And the green level was my supposed expected price drops of the Market but yeah it go deeper and deeper.

And I assumed that it is because,

The parabolic line created or built by BCH community has reach its maximum level and has been broken down, and of those who knows or has been using parabolic line as a strategy noticed this.

To give you more insight about parabolic line segment, as a graphical -tech tool on determining the next movement of a certain stocks or currency, I suggest you take time to read this link where it discussed more how traders used this as an indicator.

When traders who bought on the lower prices saw this opportunity they cut their long position and move to hedging or selling and they push the market down. They aren't on the buying side now. They choose the selling method to earn more. That drives more the panic seller to sell even more at a loss, and then driving the Market to go 'dip'er, and others who 's trading with long position, has been liquidated that added more to the dropping of the Market!

And with these two signals "news" and "graphs" make it more reasonable to accept that nothing is going on wrong. No hacking or something. Just the effect of fear, uncertainty and doubt. Play of emotions. Because, in your mind, you might have the numbers of any coins in your wallet, if no ones accept it as a payment, that will become useless.

But when traders who did hedge saw an opportunity to buy or a confirmation, because they don't want to end the game, and they saw a strong level of support they immediately bought again.

But these drop could also be a strategy, to make you stay longer, hold and wait, stick to crypto and stay on the game! Play of minds!

This is more on speculation base and I do not claim this as right or anything such that but, yeah, I just want to bore you.

And now that the Market is on stroke movement, I am open to earn more bitcoin cash! Let the game on! Roll the Game! And I will learn more how to read indicator! Hahaha! This drop made me learn one! I am actually happy I am bringing my curious state to life by this crypto world. If it wasn't because of crypto I would have stayed clueless about the local banks very uninteresting proposal and unpromising interest for investing. Yayy.

Thanks for reading and for getting bored. Please be noted that it was first written at read.

Rolling in the Dip