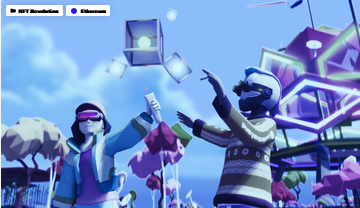 A virtual plot of land sold as an NFT in the open-world metaverse game Decentraland has sold for a record amount: more than $913,000, based on the price of the game’s Ethereum-based MANA cryptocurrency at the time. The estate NFT, called a LAND token in the game, sold for 1,295,000 MANA. According to data from NonFungible, this is the highest-value LAND sale to date in terms of U.S. dollars. However, there have been past sales for more MANA when the currency was much less valuable. The record is 2,772,000 MANA in November 2018, which was worth just under $211,000 at the time. An NFT acts as a deed of ownership to a digital item, and is tokenized on a blockchain so that it can be easily authenticated. NFTs take all sorts of forms, from still images to video clips or even tweets. In the crypto video game world, however, NFTs have additional utility and can take the form of in-game items, rare character designs, playable cards, or even customizable land plots. Republic Realm, a firm that invests in virtual real estate in crypto games, has claimed the new record purchase. Republic Realm is a division of Republic, an online investment platform that itself has notable investors, including AngelList, Binance, and Galaxy Interactive. Republic Realm has not yet disclosed how it plans to utilize the Decentraland estate, which is located in the game’s Dragon Kingdom district. “We can't wait to announce our big plans for this estate,” the firm tweeted. “Our commitment to building and developing the metaverse is stronger than ever.”
​ 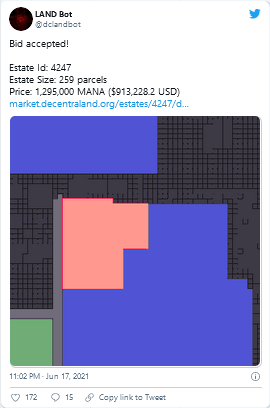 Decentraland is an Ethereum -based online metaverse in which players can freely explore the world, interact with each other, and play games within the environment. The 3D game is a bit like virtual world pioneer Second Life mixed with blocky sensation Minecraft, albeit with the blockchain-driven twist of true item ownership and a player-driven economy. Decentraland is not the only blockchain-based game built around plots of digital land sold as NFTs, either. The Sandbox and Axie Infinity, both also built on Ethereum, are two other games that have raked in millions of dollars selling virtual real estate.In this case, Decentraland broke an estate sale record established just weeks ago. Earlier this month, blockchain protocol Boson announced that it had purchased a Decentraland estate for about $704,000 in the game’s valuable Vegas City district, with plans to build a virtual mall to advertise its decentralized infrastructure products.​
You must log in or register to reply here.
Share:
Facebook Twitter Reddit Pinterest Tumblr WhatsApp Email Share Link
Top