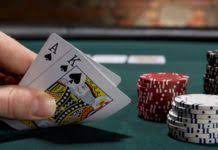 It is known that blackjack in its modern form arose from many European card games common in the 17th century. These games had a common goal - to score 21 points.

One of the first mentions of the game of blackjack is in the history of the Spanish writer Miguel de Cervantes in 1601. Two trade cheats in a game named "Ventiuna" ("Ventiuna") which means "21" in Spanish. Just like modern blackjack, in order to win at Ventiun, you need to score 21 points without overrun and Aces are either 1 or 11. Ventiunia was played with a Spanish deck that didn't have tens, nine or eight. The French version of the game was known as "Vingt et Un" which means 21 in French, in this version the dealer could double the bet and players would bet after each round. The Italian version was called "seven and a half", played with "sevens", "eights", "nine" and Broadway cards (cards with pictures). As the name suggests, the player won when he scored seven and a half points. "Sevens", "Eights", "Nines" were scored in one point, cards with faces - in half a point. The king of diamonds was the wild card and could substitute for any other card. If a player was given an excess of more than seven and a half, then he would leave the game.

The evolution of Blackjack
​
Blackjack appeared in the United States some time after the Great French Revolution. Initially, it was not popular in gambling casinos. Therefore, their owners offered a number of additional bonuses to attract players to the game. The most popular bonus was a 10 to 1 hand with an ace of spades and a jack of spades. Such a hand was named Black Jack, which then stuck as the name of the game. Because "Jack" translated from English is "Jack". Later, such payments were canceled and replaced by 3 to 2 for an ace-ten hand, no matter what figure. However, the name of such a game has also become blackjack. Blackjack was prohibited for a time and they continued to play it illegally. This continued until 1931, when gambling was legalized in Las Vegas.

Playing blackjack requires skill and few players can find the optimal strategy. In 1953, Roger Baldwin published a kind of guide that introduced the basics of Blackjack strategy. In the early 1960s, Edward Thorpe took Blackjack's strategy to the next level. He started counting discarded cards and was able to drive his strategy to an average return of 100% of the stakes. He published his research in a book called "Defeating the Dealer". The book became a bestseller. At first, casinos were scared, but soon realized that only a small number of players could actually count cards, which had no effect on overall gambling betting profits. In the early 1990s, a team of players at Massachusetts University of Technology used card counting at a professional level. They trained players and were able to find tables that were in a favorable position to count cards. The casino reacted with a few changes. They increased the number of decks and introduced quick shuffles.

Casinos have been available online since the mid-1990s. Blackjack and other games of chance have made it possible to play over the Internet without leaving home. Gambling software developers are releasing new variations of blackjack with new innovative features that still arouse keen interest in this game.

Blackjack Development
​
Scientific advances in blackjack are not just about discovering new rules, the latest security systems from fraudsters have been invented. Thanks to an Irish student, Wesley Cooper, a "smart" video surveillance system has emerged that can detect fraud in the game. Now the winners of the game can be either people with a math mind or luck.

Blackjack has evolved over the centuries and continues to evolve. With the invention of the Internet, the popularity of the game began to increase. Many online gaming establishments offer a variety of gaming options. Despite its various adaptations, blackjack continues to attract many. If you are a fan of online games then discover Blackjack with live dealers. A very realistic game!


The secret of the game's popularity
​
Millions of people play blackjack, mainly because the game is very easy and it won't be difficult even for a young child to remember the rules. The real growth came at the beginning of the 19th century, when blackjack existed almost everywhere on the globe. In some countries, this game has other names. For example, in Russia, blackjack is better known as "Wink" and Australians call it "Pontoon".

In 1931, blackjack entered the TOP 3 of the most popular games, giving way only to roulette and dice. In 1948, Blackjack improved his position in the same rating by one point. The game's popularity peaked between 1955 and 1960. The players started to develop various maximum win strategies. The most effective of these turned out to be blackjack card counting. Blackjack very quickly became the most popular casino game it was before the slots appeared.