On the 18th of June, 2019, the largest social networking company in the world, Facebook announced its very own digital currency called “Libra”, which is a global cryptocurrency built on a specific open source blockchain called as the Libra blockchain, functioning through the Proof of Stake (PoS) protocol. Its whitepaper has been released and the crypto will be debuting in 2020. Libra is backed by a not-for-profit organization called the Libra Association, which oversees and governs the Libra network and manages the reserve, backed by real-world assets. Libra coin whitepaper has been already released, and this is one of the very first facebook’s cryptocurrency projects as per the Libra coin news.

Let's discuss in details about Libra and how is it going to affect the crypto world. We will also see the reaction of some of the prominent crypto influencers

Why is it called Libra?

The name “Libra” comes from the Roman measurement of weight. The abbreviation “lb” for pound is derived from Libra and the £ symbol basically comes from the ornate L in Libra.

Facebook aims to reach 1.7 billion people across the world, especially the ones who still don’t have their accounts in any of the banking institutions. They want money to be as accessible as sending a text message. Its main motive is to reach the section of the society who doesn’t have easy access to the financial institutions. As per the FDIC (Federal Deposit Insurance Corporation) estimates, in the U.S., more than 8 million households are unbanked. The currency’s potential reach is beyond the United States and includes all the parts of the world. 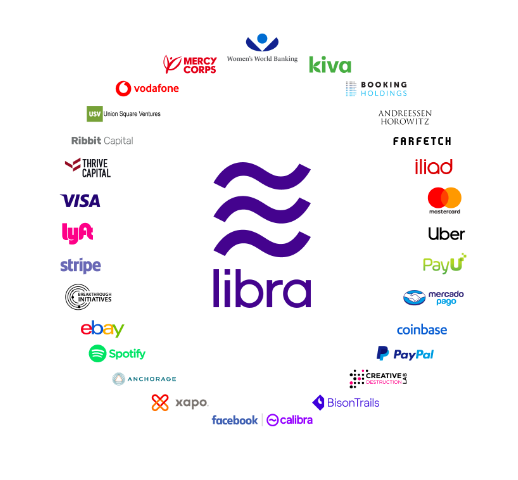 Libra is backed by most of the prestigious financial institutions like PayPal, Visa, MasterCard and other companies like Uber, Lyft, Spotify, Ebay and Andreessen Horowitz. Facebook aims to make Libra available through Whatsapp and messenger users, who can cash their local currency to buy Libra. With Libra, FB users would be able to exchange their dollars for Libra tokens, hence entrusting the fellow backers with building a reliable ledger of all the transactions, as said by Kelly, CEO, and founder of BKCM and BTC expert.

How will Libra coin work?

Libra will be a STABLE coin, which will be backed by real assets like USD, EUR, JPY, and GPB. Libra will be backed by its own reserve, called “Libra Reserve”, which is comprised of low volatile assets structured to keep its value relatively stable. For withdrawing the funds, the users( mainly from WhatsApp or messenger platforms) would be able to convert the currency into legal tender based on an exchange rate, which will be like exchanging USD for Euros for a European vacation. You need not be worried about the security feature as the Libra payments won’t be connected with a user’s FB data and even will not be used for ad targeting with the data. You can store it in the Calibra wallet, which we shall discuss in the upcoming segments.

Libra will work on the Byzantine-Fault Tolerant (BFT) algorithm, a Proof of Stake (PoS) algorithm. They have named it LibraBFT, which was released in 2018 by Dahlia Malkhi and Maofan Yin from VMware Research. The smart contracts will be written in “Move”, an executable bytecode language for Libra. The developers can play around the testnet by clicking here.

It is built on open source code which enables the research community and the developers to monitor any sort of security breach or flaws and this is the time when the company would implement a “bug bounty” program to incentivize the security experts for pointing out the vulnerabilities in a program.

How Libra can be stored?

Once Libra is released in 2020, the users can download Calibra, which is the wallet for Libra coin. This can be used to send tokens to anyone across the world with a single tap, just that you need to own a smartphone. You can even use it from Facebook Messenger or WhatsApp, as it is integrated with them, or you can treat it as a standalone app.

Calibra will be used not only for transactions but also facilitating the payment to different vendors associated with the token like Uber, Lyft, Spotify and so on.

Libra coin price will be known at the time of its release when it's being planned to introduce some airdrops. Libra coin exchange might also be one of their milestones in the long term.

How Libra is different from other Stable Coins?

Libra will be backed by a fiat currency if the following standards set by the Libra Reserve are met:

#1 Only fiat currencies with a free float will be eligible while the ones that are soft-pegged would be redundant in the Libra reserve.

#2 The decision-making process should be tied to either public organizations like Central banks or a free accessible asset like commodities.

#3 The fiat assets must be universally recognized across various jurisdictions to have a programmatically quotable value.

How can it be Purchased?

As of now, we have to wait till it gets released and then we can talk about the exchanges supporting the Libra token.

As and when the news of Libra coin evolved, there have been some crypto enthusiasts discussing the differences between both of them. Let us check them out:

#1 The first and foremost thing that differentiates the two of them is that Libra is a Proof of Stake (PoS) coin while Bitcoin works on Proof of Work (PoW) algorithm.

#2 Libra is more of a medium of exchange while Bitcoin facilitates the transactions and also regarded as more of a store-of-value. Bitcoin is "Digital Gold" while Libra is a "Digital Dollar".

#3 Libra is a stable coin and is not a prey to market volatility while Bitcoin is succumbed by volatility and fluctuations.

#4 Bitcoin is completely decentralized while Libra will be managed and governed by a centralized entity Libra Association.

These are the possible implications of Libra crypto in the future:

#1 FB has a higher probability of furthering its place as a service provider of open source tools for sites, digital apps and e-commerce.

#2 Due to its increased accessibility from everyday retail users and institutional providers, Libra may add up the cryptocurrency volume.

#3 It might turn out to be payment facilitators, which can reshape the payment industry, which might threaten the existence of traditional financial institutions.

#4 Service providers may come up, building decentralized applications on the Libra network, which might serve as a payment provider across the globe.

#5 Libra might see global adoption and can even emerge as the “unit of trade”, which would reduce the dependency on a single currency.

The magnitude of Libra’s success directly depends on how Libra association can convince the financial institutions and regulators in maintaining the custody of collateral reserves. You must even know that the Facebook corporation and Libra Association are two separate entities, which might add on to pulling the trust of the people across the world.