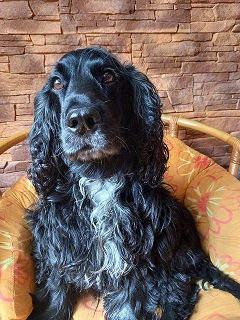 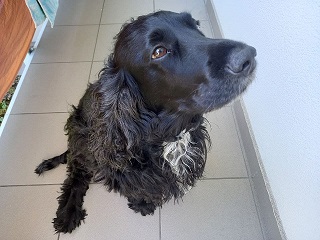 It's my dog, called Nero!

​
The English Cocker Spaniel was bred as a hunting dog to scare away game birds.

Originally the word "spaniel" was a general term and meant a hunting dog of a certain type. Eventually, a distinction was made between spaniels working in the water (watercraft) and other spaniels that helped hunters on land (land). Land spaniels were later divided into game display (setters) and springers, which scarred the birds out of the brush, allowing hunters to shoot them. These early springer spaniels are the ancestors of all currently recognized used spaniel breeds. It happened that from one litter of puppies came larger dogs - springers, used to scare away large birds, and smaller ones whose task was to force smaller birds, such as woodcocks, to fly. The first part of the name of the breed comes from woodcock.

The English Cocker Spaniel breed has been known since the nineteenth century, although its origins date back several hundred years earlier in contemporary dogs of the spaniel type. It is generally accepted that the name "spaniel" comes from the Old French word "espaigneul", meaning a Spanish dog, which indicates the origin of spaniels from dogs bred in Spain - especially for hunting and retrieving.

Spaniels came to England with their Spanish owners, and some English aristocrats bought or received them as gifts. They used these dogs on their estates for hunting purposes. Spaniel's growing popularity is reflected in numerous references in English literature, including the works of Geoffrey Chaucer in the fourteenth century and the plays of William Shakespeare in the sixteenth century.

In 1893, the Kennel Club in Great Britain recognized Cocker Spaniels as a separate breed (the term "English" was added to the breed name later). In 1902 a separate model was issued. Since then, separate breeding lines for Springer Spaniels and Cocker Spaniels have been compulsory. This breed has found numerous followers in America as well, but at the beginning of the 20th century American type Cocker Spaniels were bred. These dogs were a bit smaller than the English Cockers, and the American breeders paid more attention to the show values than the performance of these dogs. At that time in America, both types of cocker spaniels were competing with each other.