The plans for the controversial social network BitClout are becoming clearer.​ 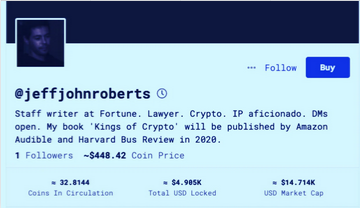 BitClout is making a move. The controversial crypto-based social network earned a pair of prominent endorsements this week from Coinbase CEO Brian Armstrong and a partner at the influential VC firm Sequoia. Meanwhile, crypto exchange Blockchain announced it would list Bitclout's token, and the New Yorker described the project—which involves minting coins tied to individuals' fame and reputation—as a "democratizing power." All of this follows a very rocky rollout for BitClout in March. Recall that back then critics—including Decrypt—blasted the new site as a bumbling, privacy-invading disaster. Others complained of technical glitches and suggested BitClout's unusual sign-up model, which requires you to exchange Bitcoin for BitClout tokens to claim your profile, smelled like a Ponzi scheme. The whole thing felt even more fishy when the project's founder, Nader Al-Naji, insisted on hiding behind a "Diamondhands" pseudonym.
Now, though, it's worth asking if these apparent missteps were deliberate and if Al-Naji is crazy like a fox. That's the view of one investor who told me this week's announcements were part of a carefully plotted communications strategy to build hype around the project. Sure, BitClout's approach led to negative headlines but now everyone in crypto, and a lot of people outside of it, have heard of the site.

It's also clear other aspects of BitClout's unusual rollout were carefully calculated. Al-Naji's use of the "Diamondhands" pseudonym, for instance, gave the project an air of mystique and so did the scramble to access the site in its early days. Just like the social app Clubhouse—another pet project of BitClout investor Andreessen Horowitz—Al-Naji restricted access to a handful of early influencers, who then passed on the link to others. Nothing like exclusivity to create buzz. If you believe BitClout's boosters, all of this is part of a larger campaign to attract attention to an idea whose time as come. That idea is a Twitter-style social media platform that is decentralized, allowing users to control their content and make money without fear of being booted off. But does this justify Al-Naji's aggressive tactics—such as scraping Twitter in order to create Bitclout profiles for people without their permission? Or creating a network that literally puts a price on individual people? The investor, who asked not to be named, claims the indignation over BitClout's tactics is overblown. Most celebrities and creative types, he says, are excited about having a new platform to make money and manage their image. (Those who don't want to be on BitClout can send an email to be taken off—though this process also raises the question of just how decentralized the project really is).​
We'll see what happens. If Al-Naji is indeed crazy like a fox, he has laid the groundwork for a major new social network— a network that is also poised to be the first breakout blockchain application outside of finance. But there's no guarantee he'll succeed. It could also be that Al-Naji proves to be not crazy like a fox, but crazy like "what were you thinking?"


For now, BitClout still feels one step away from disaster. The project's interface is still so janky as to make it unusable to ordinary people. Meanwhile, those who have succeeded in getting on the platform—and had to exchange Bitcoin for BitClout tokens—are rightfully asking when they will be able to convert those tokens back again. And then there are the regulatory risks, which are enormous. If there is a project that will tick off both the SEC and the FTC at the same time, it is BitClout. It also doesn't inspire confidence that Al-Naji's last venture, a $100 million stablecoin project called Basis, collapsed. It's too soon to say how this will all shake out. If BitClout succeeds, it could disrupt both crypto and social media in profound ways. If it doesn't, it will go down as just another crazy idea.​
You must log in or register to reply here.
Share:
Facebook Twitter Reddit Pinterest Tumblr WhatsApp Email Share Link
Top