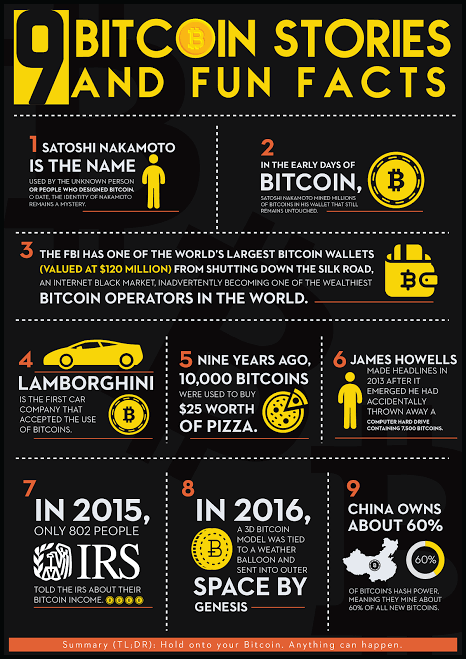 ​
It is in the news almost every day and a big talk seems to be everywhere we land.
But how big is Cryptocurrency?
And how many consumers really understand what it is?
In this article we will look at some important statistics on Cryptocurrency to find out.

Do Most People Know What Cryptocurrency Is?
Short answer - no. 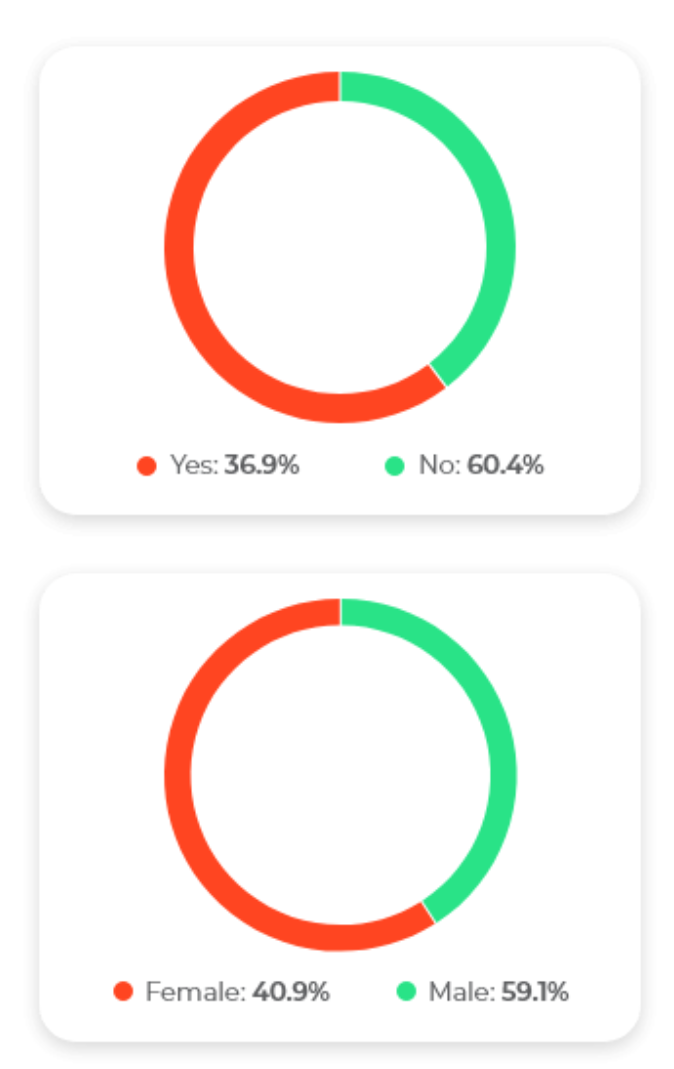 Which Cryptocurrency is
the most sought after in the world?

The most searched Cryptocurrency online is Bitcoin, with an average of almost 5 million searches per month.
To find out, we used a tool called Keyword Finder, which allowed us to see the number of searches for different types of Cryptocurrencies per month.
In this study, we looked at the volume of searches for 5 of the most well-known, most widely used Cryptocurrencies: Bitcoin, XRP (Ripple), Litecoin, Ethereum and Bitcoin Cash.
The results show that the most popular type of Cryptocurrency currently searched around the world is Bitcoin, which generates approximately two-thirds of searches. This was followed by Bitcoin Cash, XRP (Ripple), Litecoin and Ethereum. 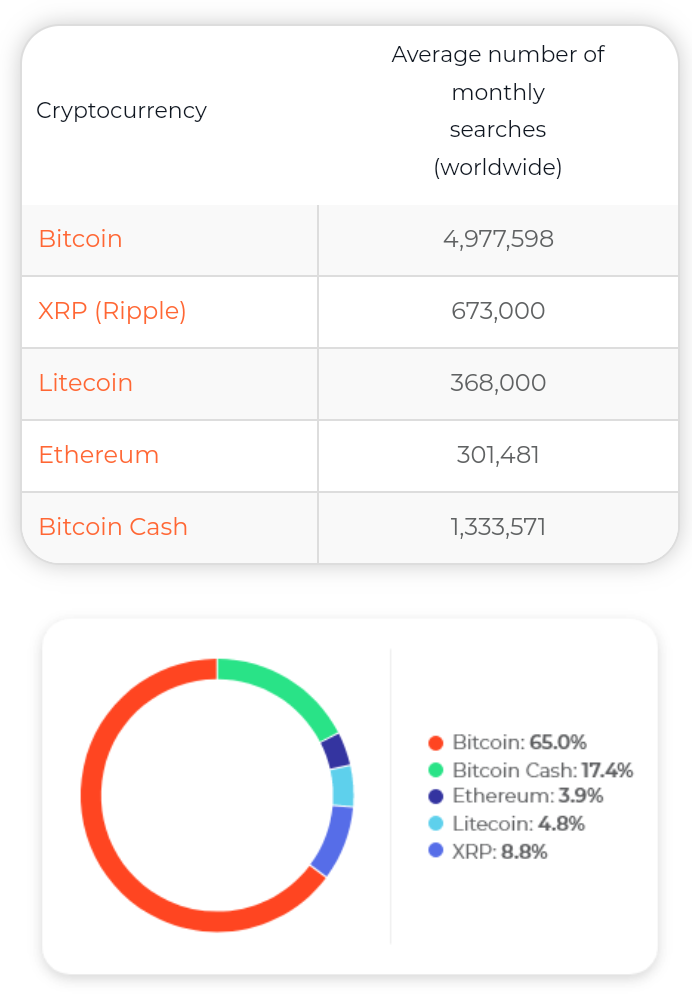 Which Country Is Most Wanted
For Different Types of Cryptocurrencies? 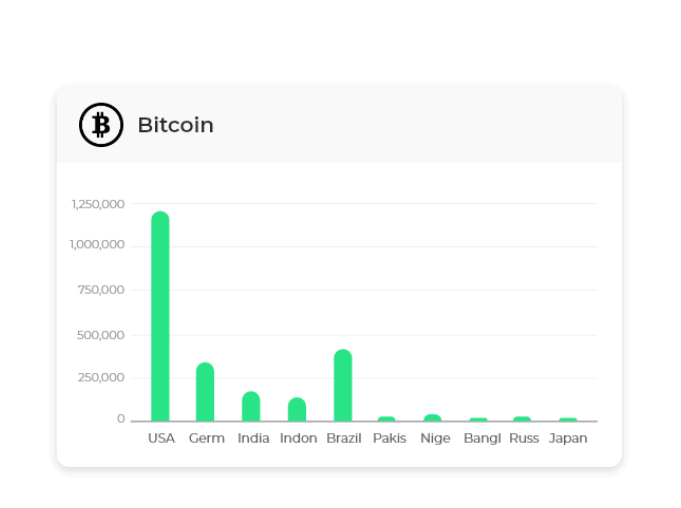 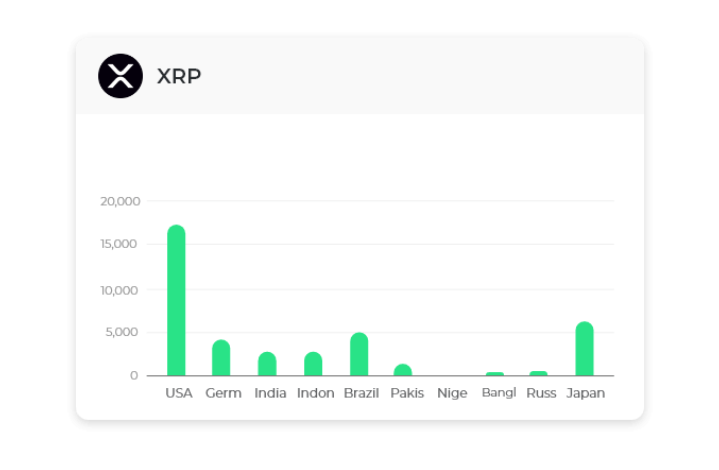 ​
Next, we focus on searches for 'XRP' (also known as Ripple). Again, the country with the most searches is the USA, with an average of approximately 17,000 searches per term per month. Japan's interest in XRP is also significant, with 6,600 monthly searches. 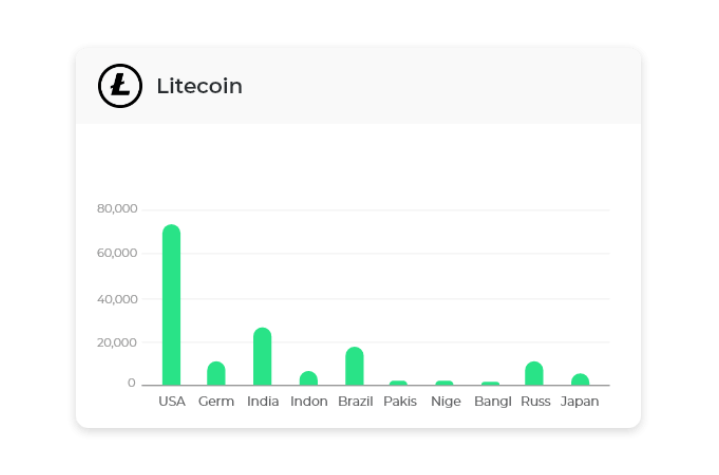 ​
More searches for 'Litecoin' came from the USA than any other country included in our study, with an average number of monthly searches from the States of over 200,000. There are fewer searches for this term than other types of Cryptocurrency, with 14,800 searches from Brazil and only 12,100 from India. 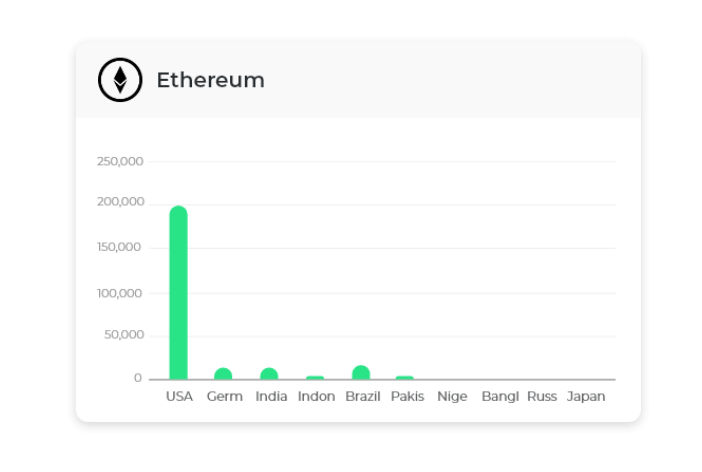 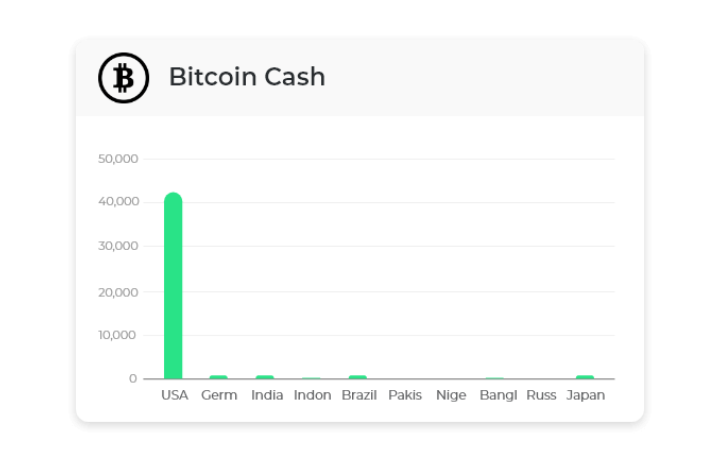 Bitcoin cash is one of the less popular types of Cryptocurrency on this list. Like the currencies above, the USA makes up the vast majority (43,214) in searches for 'Bitcoin cash' per month.

The Social Popularity of various Cryptocurrencies
This chart shows the proportion of cryptocurrency hashtags used on Instagram. As you can see, Bitcoin has the largest proportion, as #Bitcoin has been used more than 8.5 million times. The next most popular is Ethereum, followed by Litecoin, Bitcoin Cash and XRP. 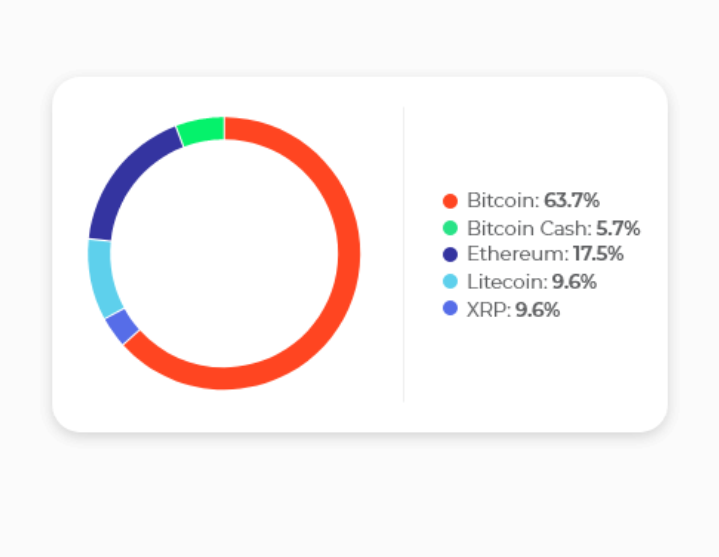 But why is Bitcoin so popular?
One of the clearest findings of this investigation is the popularity of Bitcoin, and the growing interest of the population in this type of Cryptocurrency.
But why are more people interested in Bitcoin compared to other types of currency?
To find out, we consulted with Bobby Ong, co-founder of cryptocurrency review site CoinGecko and curator of the newsletter about Cryptocurrency, the weekly Altcoin.
"This [Bitcoin] is the first decentralized cryptocurrency and has the biggest impact on the network," said Bobby.
The first altcoin, Ripple (XRP), was launched just two years after Bitcoin was created which is one of the many reasons why all other Cryptocurrencies are not as popular or as valuable as Bitcoin.
Bitcoin is a relatively de facto reserve currency for all Cryptocurrencies, which increases its value even more. ”
You must log in or register to reply here.
Share:
Facebook Twitter Reddit Pinterest Tumblr WhatsApp Email Share Link
Top