The little guy takes the win while the big guys shrink in size.​

While Ethereum investors line up at the job center and Bitcoin maximalists hold on for dear life, it’s a great day to be a Celo investor. The coin, which is listed (and widely promoted) on Coinbase, increased by about 46% in the past day to $3.9, according to metrics site CoinGecko, and 60% in the past week. Celo is a little like Cash App or Venmo but on the blockchain. Meanwhile, Bitcoin has fallen 5.6% in the past 24 hours and 11% in the past week; Ethereum fell by 3.9% and 19.1%, respectively. A couple of big moves may explain Celo’s good fortune. Yesterday, the crypto-friendly browser, Opera, added Celo stablecoins, as well as CELO itself, to its browser’s crypto wallet.
​ 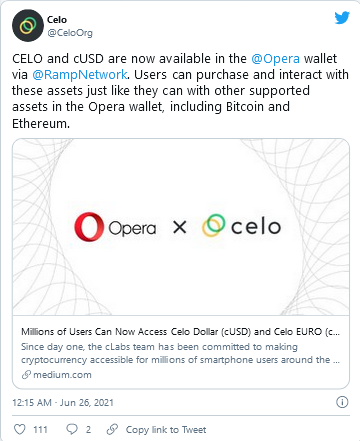 This, by itself, isn’t terribly big news, since Opera's user count doesn’t even make it onto the same charts as Google Chrome and Apple’s Safari browser. Then again, Celo itself isn’t terribly big news. Its market cap is unclear but fairly small by all estimations: CoinMarketCap says it has a market cap of $3.2 billion, while Nomics cuts it to $860 million and CoinGecko to just $454 million. More good news came yesterday from institutional crypto trading platform Anchorage Digital, which added support for Celo Euro. The euro stablecoin was also listed on KuCoin earlier this week. Also yesterday, Andreessen Horowitz’s crypto wing, A16z, selected a subsidiary of Deutsche Telekom as a validator for the Celo network. Again, such news would be insignificant for most coins. But when the coin itself is small potatoes, it doesn’t take an awful lot of excitement to move the market.​