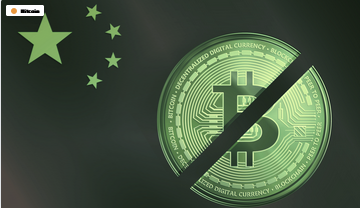 Hash rates of some of the biggest Bitcoin mining pools in China have dropped by up to 37% after Sichuan ordered energy companies to stop providing power to mining farms in the province. News about the shutdown order broke yesterday following a meeting between the country’s Science and Technology Bureau, and the Sichuan Ya’an Energy Bureau. Energy companies were given till the start of Sunday June 20 (Beijing time) to cut the power. Chinese mining pools are an integral cog in the global crypto ecosystem, and many of the miners in these pools draw from Sichuan’s abundant hydroelectric power. Mining pools are cryptocurrency mining collectives that share their computational power to mine cryptocurrency. The shutdown order that was circulated to the energy companies identified 26 mining pools in the Sichuan province. "Molly", head of marketing at Chinese blockchain company Hashkey Hub, tweeted that the hash rate “already dropped significantly” after the Sichuanese government announced it would cut off power to Bitcoin mining farms. 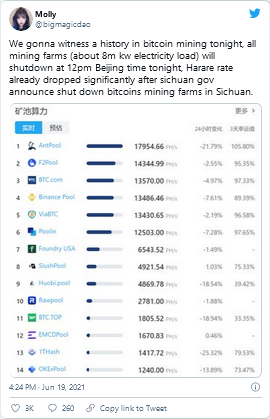 Mining pool hashrates are in freefall. Since Molly’s tweet, some mining pool hashrates have nosedived further. Mining speeds on top mining farm AntPool have dropped by 27.53%, while BTC.com’s speed is down 18.34% and Huobi.pool has fallen 36.79%. China has been cracking down on cryptocurrencies for the past few months. It’s had a knock-on effect on the global price of crypto. Bitcoin’s worst crash in the 12 years got worse last month when payments associations reiterated support for a 2017 ban on crypto transactions. The state’s next target was mining operations. On June 9, Xinjiang province ordered several crypto miners to shut down. In the notice, Xinjiang cited “Measures for the Energy Conservation Examination of Fixed-Asset Investment Projects”—a bit of regulation first issued in 2016. The country’s massive crackdown on currencies like Bitcoin and Ethereum, which are tricky to regulate, sets the stage for the state’s central bank-backed currency: the digital yuan. China is currently piloting the coin, which, as of yesterday, can be converted into fiat at more than 3,000 ATMs in Beijing. Given China’s profound influence on crypto mining and market value, today’s drop could severely reshape the Bitcoin mining industry as we know it.​
You must log in or register to reply here.
Share:
Facebook Twitter Reddit Pinterest Tumblr WhatsApp Email Share Link
Top