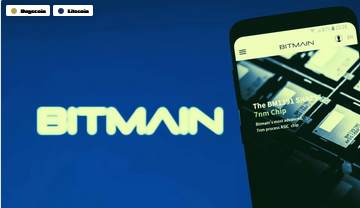 At an exposition in Chengdu today, Beijing-based mining hardware giant Bitmain released a new mining machine designed for mining Dogecoin and Litecoin, according to a tweet by blockchain journalist Colin Wu. 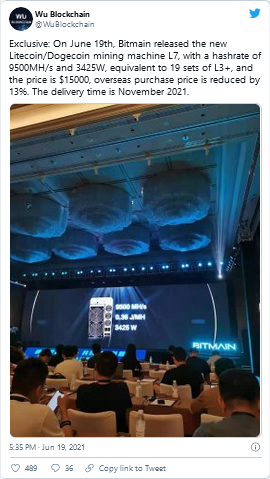 Wu reported that the new miner, the Antminer L7, has a hashrate of 9500MH/s and requires 3425 watts to run—the equivalent to 19 Antminer L3+ miners. The L3+ is Bitmain’s previous flagship Litecoin mining unit, and is still advertised on Amazon as “the most powerful Litecoin miner” with a hashrate of 504MH/s. Bitmain’s new model reportedly retails for 100,000 yuan (around $15,000) a unit, and the company offers an overseas discount of 13%. It expects to deliver the first miners by November this year.

To make the most of this year’s bull run, miners sucked up the world’s supply of graphics chips and CPUs. The only miner listed on Bitmain’s website, the S19j, is sold out. Others are listed as “coming soon.” It’s not just Bitmain. PC gaming diehards have been struggling to get their hands on new Nvidia chips. Powerful GPUs like the company’s GeForce RTX 3080, RTX 3070, and RTX 3060 Ti are, unfortunately for gamers, very efficient at mining cryptocurrencies (particularly Ethereum). In May, Nvidia announced it was cutting the hash power on these units. Then it announced its own, purpose-built Ethereum miner, the CMP, or Crypto Mining Processor. At the end of last month, Quartz reported that the global shortage of Nvidia chips pumped resale prices by as much as 300%. While the crypto market is no stranger to fluctuation—today is a particularly bad day, with prices down by about 5%—the feverish demand for new hardware indicates that, in mining circles at least, crypto is expected to stick around a while.
You must log in or register to reply here.
Share:
Facebook Twitter Reddit Pinterest Tumblr WhatsApp Email Share Link
Top