Despite falling prices, Salinas is incredibly bullish about the world’s biggest cryptocurrency.​ 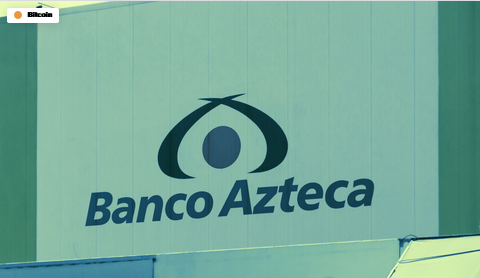 Mexico’s third-richest man, Ricardo Salinas Pliego, tweeted this morning that the bank he founded, Banco Azteca, aims to be the first bank in his country to accept Bitcoin. Salinas runs Grupo Salinas, the sprawling conglomerate that controls the bank he founded 19 years ago. Should he manage to get Banco Azteca to accept Bitcoin, the bank would join a small but growing list of banks transacting in Bitcoin. The bank claims to be one of Mexico’s largest, citing over 16 million savings accounts and 19 million credit accounts. Until 2019, the bank operated in El Salvador, which recently declared Bitcoin as legal tender.
​ 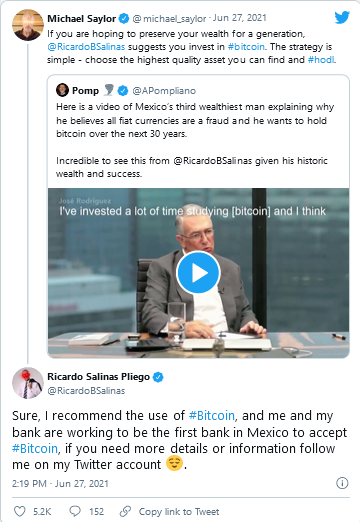 Salinas’s tweet was a response to Michael Saylor, the cloud computing expert turned Bitcoin bull who had tweeted a week-old video of the Mexican billionaire promoting Bitcoin and calling fiat a “fraud.” In the video, an interview with Jose Rodriguez of Bitcoin ATM provider Chainbytes, Salinas said that Bitcoin is “an asset that should be in the portfolio of any investor” and it “has value and an international market where it is traded with enormous liquidity worldwide.” Salinas then dismissed Dogecoin and other altcoins as “shitcoins.” At the start of the year, Salinas joined the likes of Michael Saylor, Tesla CEO Elon Musk, and Skybridge’s Anthony Scaramucci, when he changed his Twitter bio to ‘Bitcoin’. In November last year, Salinas tweeted that he had invested 10% of his liquid portfolio in Bitcoin.​

Salinas has a net worth of $12.9 billion according to Forbes, making him Mexico’s third-richest man and the 166th richest person in the world. 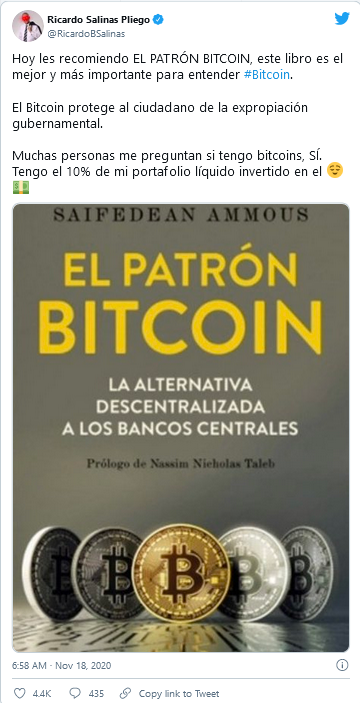 Salinas made his fortune as founder and chairman of retail and media conglomerate Grupo Salinas. The bulk of his fortune comes from his stake in Grupo Elektra, a home appliances retailer that uses Banco Azteca to sell loans to lower-middle-class Mexicans. Salinas is no stranger to controversy. In 2005, the US Securities and Exchange Commission charged TV Azteca—a Salinas enterprise—with attempting to conceal Salinas’s $109 million windfall through the undisclosed sale of TV Azteca stock. The case was settled in September 2006 when Salinas agreed to pay the SEC $7.5 million in penalties and compensation. During the pandemic, he also tweeted pictures from an opulent yacht party, while publicly downplaying the danger of COVID and leaving a Mexico City Grupo Salinas call center open in violation of lockdown measures. Three employees died from the virus.​
You must log in or register to reply here.
Share:
Facebook Twitter Reddit Pinterest Tumblr WhatsApp Email Share Link
Top